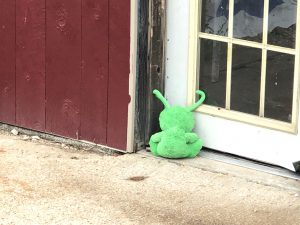 In a shocking turn of events, new evidence has been uncovered in the story of Little Willy missing in Uranus. The Uranus Examiner was anonymously provided a photo that appears to be our Little Willy entering the Uranus Dental and Proctology Clinic, prompting this editor to go undercover at the clinic.

After being falsely told that the Evil Dr. Keen would be out for the day, due to a very suspicious appointment at a company that sells quicklime, the Uranus Examiner decided to try to do a little undercover investigating. For your information, quicklime is a substance used throughout history to prevent corpses from putrefying and generating a smell. This editor was very suspicious.

Upon entering the clinic, I discovered that the Evil Dr. Keen was, in fact, actually there. He told me to “get out,” but I was able to get some footage of the inside of an examination room. After reviewing the footage, we discovered what could be evidence that Little Willy was actually in the clinic. The Uranus Police Department has been provided the footage.

As an unbiased news source, we cannot say for sure that the Evil Dr. Keen is holding our Little Willy against his wishes, but you, as the viewer should be the judge.