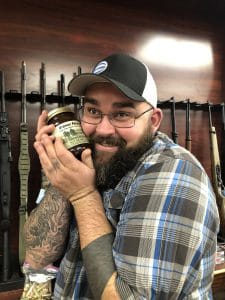 Looking for a last minute gift idea for the man in your life?  Are you still trying to figure out what to give your crazy Uncle Bob?  Maybe you drew someone’s name in “Secret Santa” and have no clue what to get them.  Don’t worry, Uranus has you covered.      Uranus understands the basic wants and desires of many men; Bacon and Bourbon are almost always near the top.  Men also have the innate desire to cook meat over a fire. Let’s face it, most men love to BBQ. Meet all those wants and desires with Uranus Farm’s Bacon Bourbon BBQ Sauce.  Yes, that is right, Bacon and Bourbon BBQ sauce.

What does it taste like?  Well, it’s pretty amazing. Bacon Bourbon BBQ Sauce is the perfect compliment to any grilled or smoked meat.  Best of all, Uranus can ship you a jar today. So you don’t have to venture all the way to Uranus to get some….even though you need to check out Uranus in person.

Bacon Bourbon not your thing?  While that doesn’t make any sense to us, there are those who prefer a Sweet/Heat BBQ sauce.  For those people that like their meat sweet and spicy, Uranus Farms also offers Honey Habanero BBQ Sauce.  Honey Habanero is a fantastic combination of sweetness combined with the perfect amount of heat.  It’s simple to use, just start slapping some on your meat, then enjoy.

There are many other really cool offerings from Uranus Farms.  The best part is, they are all under $10 (except the 32 oz bottle of Mild Pickled Eggs, that one is $10.99).  So click the link and check out the Uranus Farms BBQ Sauces and while you are shopping, you can peruse through the great selection of Uranus farms Pickles, Salsas, Preserves, and Syrups.  You are sure to find something everyone will like……even Yo’ Mama loves the stuff from Uranus!