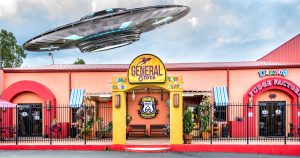 URANUS, MO––  A new set of extraterrestrials landed in Uranus last week to a lukewarm reception, according to reports from eyewitnesses.

On Friday, April 26th, a series of reports flooded the airwaves, all describing something to the effect of ‘strobing blue lights’ in the night sky. Few residents were soothed by the attempts to explain away the phenomenon–– Aurora Borealis, dry lightning, et cetera–– and suspected the explanation to lie beyond the boundaries of the natural world.

“It wouldn’t be the first time something like this has happened,” expressed Bart Elliot, head chef at Moonicorn Creamery. “First there was Fred, then Little Willy. We’re no strangers to extraterrestrials, or whatever, probing Uranus. Stuff like this–– lights in the sky–– is usually the tip off that they’re about to land.”

“You know what they say about Uranus. ‘Open to all!’” attested Manager Tina of the Fudge Factory. “We’re a roadstop, you know. It doesn’t matter whether that road is Route 66, or some interstellar path beyond human comprehension. We’ll serve you coffee and laughs no matter who you are or where you’re going.”

At approximately 3am on Saturday morning, a cluster of residents gathered in one of the local fields to give the cosmic travellers a resounding Uranus welcome.

“The lights had become overwhelming by the point,” recalls Elliot, so we knew it was going to happen soon.”

According to multiple eye-witness descriptions, “your garden variety flying saucer” landed amidst the group of waiting Uranusites at exactly 3:07 am. This was confirmed, as everyone’s watches simultaneously stopped working.

A door in the craft slid open, and three humanoid creatures emerged. When asked to describe the alien visitors, many of those present expressed that they weren’t “anything special.”

“The shock factor goes away after a while,” shrugged Fudgepacker Elondra Jensen. “Once you’ve seen one alien, you’ve seen ‘em all.”

The interaction started off on a sour note as both parties began to speak at once.

The centermost alien spread his arms out and began his salutations just as the group erupted in their practiced “Welcome to Uranus!” A beat of silence followed, after which both parties overlapped again.

After some verbal shuffling, and a bit more silence, the alien that had spoken cleared his throat and said, “Yes. Um, well… greetings, Earthlings. I am Zorr of the planet Quexlar. We come to you in peace. I imagine first contact must be surprising, so––”

“Oh, no, it’s all right,” Manager Tina interjected at this point. “We’ve gone through this whole song and dance before.”

At this point, Zorr blinked at the group then turned towards his compatriots, whispering heatedly. He then turned back to the crowd.

The crowd collectively responded in the negative.

“Fred came to Uranus… what, a few years back? His ship was a ship kind of like yours,” explained Bart Elliot. “Of course, his was a lot bigger.”

“Our ship is a functional size!” Zorr allegedly snapped back. At this point, Zorr lapsed into a generally foul mood, meeting any attempt at correspondence with “no. No, whatever. It’s fine.”

“It was pretty passive aggressive,” recalled Jensen. “Everyone was really uncomfortable.”

Zorr and his party were extended an invitation to visit the town proper but declined, opting instead to shack up in the nearby Motel 6.

“We wouldn’t want to overcrowd you with aliens or anything,” were his scathing parting words.